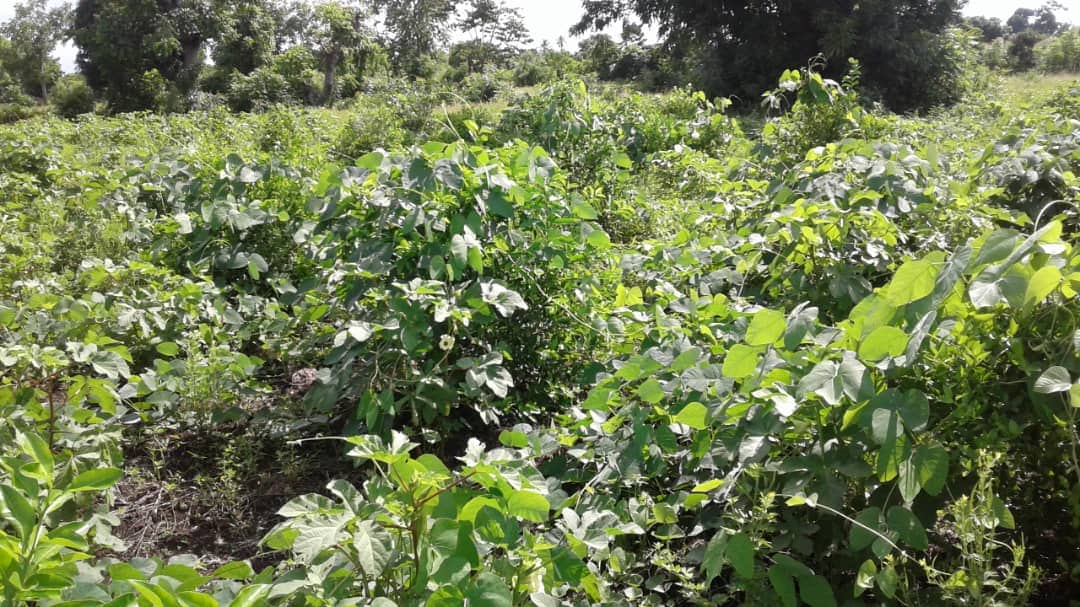 04 Feb Why Plant a Bean You Can’t Eat? by Gordon Clark, Board member and Horticulture Advisor

Posted at 23:24h in Blog by Kathy Radcliffe 0 Comments

PHF has a young lime orchard. When we looked at it a year ago we noted that the trees were not growing, were an off-color and perennial weeds were competing . All of this pointed to nitrogen deficiency. Coupled with the issues that expensive fertilizers aren’t available or affordable and it is difficult to weed this field, the future for the limes was less than optimal.

Enter one of the superstars of cover crops/green manure…the mighty but inedible Velvet Bean, aka Macuna. This plant is quick growing from planting and dispatches its opponents, aka The Weeds, very quickly. The leaves overlap one another like shingles on a roof, preventing any light from shining on the ground, effectively starving the weeds of sunlight. Another factor is L-Dopa in the leaves may deter weed growth. Its aggressiveness also can be an issue as it has to be cut back from the lime trees so it doesn’t overtake them.

As if that isn’t  good enough, Velvet Bean is a legume that makes nitrogen from the air; think fertilizer. On average, it saves PHF from purchasing 6 sacks of urea per hectare and it contributes 60 metric tonnes of biomass per hectare, all which improves the soil by helping to retain moisture. Notably it produces an abundance of seeds for future planting. Only 15 pounds of seeds planted produced 5 sacks of seeds harvested.

What are the results: PHF reports that the lime trees have grown like a teenage boy and are adorned with beautiful green leaves: think green- like- limes instead of yellow- like-lemons. An additional benefit is that the next crop between the trees will be Peanuts, which will use the nitrogen created by the Velvet Bean.

So if it’s a bean, why can’t you eat it? It has lots of protein but it has cyanide; though much less than cassava, which is eaten.  As mentioned above, it contains L- Dopa, the same as is used to treat Parkinson’s disease. It just requires too much preparation to be eaten safely. Such is life: the bad comes with the good.